Land, ho! is an exhibition that describes the discoveries and perceptions of artists who are able to configure their own landscapes on the basis of found forms. All of them work with the transformation of the natural, restructuring its possibilities. They are artists who like to distil nature into landscapes, either by addressing the territoriality of paintings or by sounding out nature’s materials and their limits, in order to focus our gaze on the forms that appear, whether physical or visual. On the one hand, they are very pictorial artists, because they allow themselves to be seduced by transition and textures, by what is happening and by how consistency is dissolved. However, their very diverse ways of going about their work mean that we could also group many of them by their sculptural leanings, which are tightly bound to nature and its phenomena, or by their use of drawing or artisanal processes to achieve a structuring and performative effect. Because, even in their large-scale works, their true narrative hides in the “infra-thin", in mismatch and imperfection, in an interstitial time and space where we are able discover the material´s most fragile aspects.

Land, ho! is structured as a walk that encourages art to reconnect itself with the Earth, averting its colonisation in order to safeguard its values, of particular importance when our present has demonstrated the inability of politicians to control nature by shaping it to suit their purposes. This is nothing new if we remember how, fifty years ago, Guy Debord described a society that was increasingly sick yet increasingly powerful, to the extent that it developed a movement to control nature that it itself out of control. Therefore, one of art’s fundamental tasks is to defend the slowness of nature, of its own processes and of the world in general. Land, ho! is a serene exhibition, built for the patient observer, who is less attached to the impatience of novelty and more committed to a tradition that, far from remaining static, must be protected from the moment of its reinvention. Hence, the artists included in it are able to humanise their landscapes, whether real or imagined, proposing a silent approach to reality from a perspective as tense as it is committed.

One example is the installation presented by Françoise Vanneraud, a landscape that contains fragments of other landscapes accumulated by the artist during her travels. Her interest in sounding out the process and, more specifically, our experience of nature, between what is hidden and what is revealed, leads her to deal with time and landscapes as territory, as a historical narrative, as memory. In addition to doing away with a fixed point of view, the artist adds the sense of the dérive as an alternative way of seeing and inhabiting reality. This is key to understanding her plastic works, a kind of discontinuous or fragmentary meta-script, where in order to find something you must first be lost. From this, Vanneraud establishes a sensation of ephemerality, reinforced by a style of drawing that expands and enters into dialogue with other media, in many cases to objectify itself and develop into sculpture, as if it were trying to distil the experience of wandering in artworks that project a transterritorial condition. She plunges us into a kind of hollow that projects us into another landscape, insisting on the value of the journey, on transition as exile and history, on the Earth as uprooting, as oblivion, but also as affective memory.

In the works of Inês Teles, reality is also clarified as a question, as a delicate enigma. Her works, like those of Ricardo Calero, seem always to survive on the brink of their disappearance from the retina. Both reveal to us brittle, if eloquent issues of material. Inês Teles because she deals as much with material as with form, which is never imposed and which paradoxically introduces distance through its approach, by sliding over the fragility of things to address their transformation. It could be said that she sculpts a kind of distance in movement, that slides, that falls away, as in the films of Tarkovski, where any form of approach effectively means a distancing. Because it is in the performativity of these procedures - whether the repetition of gestures, the geometric insistence, the understanding of the detritus as a kind of signature, the plasticity of her drawings expanded across the wall, or the thickness of her works - that the conceptual basis of her work is sustained.

Meanwhile, Ricardo Calero invokes fluidity in a less cryptic and more poetic way, folding and unfolding the time we have experienced, seeking minimal, porous, latent horizons in all kinds of textures, in the unexpected. Thus, he engages with the wear of materials and, like Borges, understands time as substance, penetrating the space of life to discover what Gadamer describes in German as verweilen, learning to linger on a work, allowing the image to unfold its beauty. This is why he turns to natural materials, which allow our eyes to penetrate their surfaces, their patina of wear leading us to other landscapes, bringing us closer to Cézanne’s aspiration of making visible how the world touches us. This reading of textures and density, this setting of optical and haptic temperatures, reveals the hidden poetic dimension of the artist's works, which always comes from the least part of the object, or more specifically from its resonance, between the proximity of solutions and the distance of doubts.

In Menchu Lamas this vulnerability of materials is seen in images or forms that seem to grow towards their own extinction, halfway between estrangement and belonging, an open landscape, although paradoxically inaccessible on its path to abstraction. In his paintings the image suspends its meaning, instead forming its own space. The symbolism, primitivism, gesturality or spatiality of colour, coexisting with the apparent tarnishing of forms on the surface of the painting, are resolved as a sort of pictorial magma, giving prominence to the residue, the chromatic sediment, the enigmatic tension. Hence his habitual labyrinthine forms, cartographies, territories of colour, his typographic patterns or circular drifts, all formulas to immerse our gaze, which is lost in a kind of palimpsest.

In this case using ceramics, Veronica Moar is more prone to interpreting the landscape as a material and a form, taking it both as a point of departure and of arrival. A landscape that disintegrates and distorts itself, that is disfigured and restored, a processed landscape. Geological, telluric and seismic elements eloquently describe her own words: "I live in a territory where rocks invade the landscape. Galicia is one of the key places for studying the Earth’s geological history; it’s a natural laboratory. (...) the material itself ends up being transformed into a ceramic work that, millions of years ago, was a piece of rock. (...) A section of landscape that decomposed and eroded until it became something I could model with my hands. It seems appropriate to me to address sculpture through its most elemental material.” In this sense, it is important to remember that Moar works with porcelain, which is not found in nature in this form, but rather is the result of combining three natural elements - quartz, feldspar and kaolin - which are, in turn, elements fundamental to the formation of the Earth.

Gabriela Albergaria takes us to another place, basing her work on a version of nature that is manipulated, transported and historically constructed. She reflects critically on the effects of human behaviour, delving into the way the landscape has been transformed by power relations, domesticating nature by creating gardens that speak to us as much about the fiction of virtual indigenousness as about the unquestionable change and transmutation of ecosystems. In this imposed and imported, colonised and performative kind of nature, Gabriela Albergaria views gardens as representational systems and, as we well know, a representation is not the same as an image, but rather is something very specific, a deliberate act carried out in accordance with parameters or criteria developed over time. Her works are, therefore, a kind of consequence. Rather than describing nature, the artist is telling us about the different ways we have of seeing her, of approaching her, about structures, about hierarchies. In short, about cultural constructions that, although manufactured by us, end up defining our own visual context. Pasolini said that changing the angle from which we look by one millimetre is enough for our vision of the world to be completely altered. What Gabriela Albergaria does is combine the elements in such as way that we, as active observers, are able to construct a vision from these found forms and serendipitously shout: Land, ho! 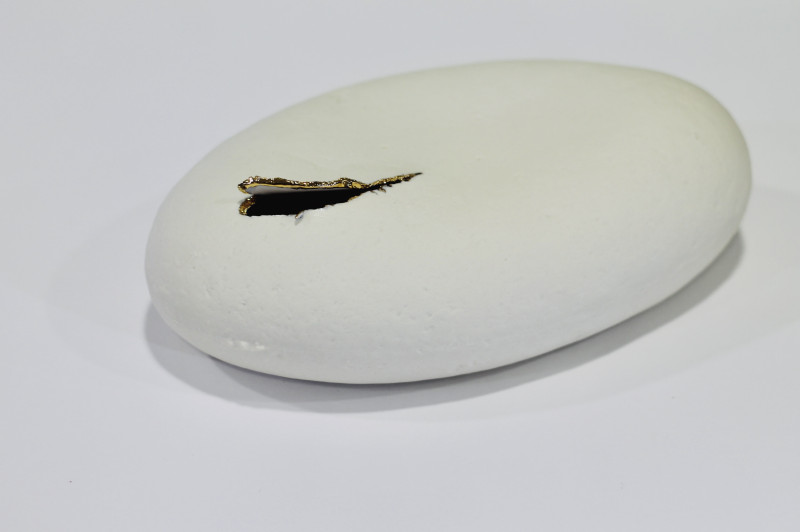