The word "pavilion" defines a place built by human hands, often temporary or for a specific event, from which you can appreciate the flora and fauna that coexist in the context in which it is built, such as a garden, a park or a forest. Other definitions highlight its function as a place of relaxation and pleasure, a space with a certain intimacy that does not abandon its character as a viewpoint or observatory. Based on this concept, the exhibition Pavilion follows the figurative trajectory of its twin sister Hey! Follow me! It’s happy hour time!, contrasting with the party and the euphoria of its predecessor to create a corner of calm, where it’s addressed and imaginary in which the wildest and most jungle representations share space with the most domestic and humanized side of nature.
This time, the joie de vivre is presented in a space where different emotions prevail, but without abandoning the naïve and childish features that, playing with irony and sarcasm, represent the way in which the artists see the world around them, from the big cities to the most remote places.
In Pavilion, the canvases by Jacob Gerard, Joachim Lambrechts, Julio Linares, Galina Munroe, Martin Paaskesen and Hunter Potter function as windows from which to peer into different exteriors - or interiors - turning the space into a open place to different realities and imaginaries, to be accessed through each painting.
The fantastic themes and exaggerated colors of Hunter Potter (United States, 1990) connotes the nostalgia for characters and lifestyles that the artist knew in the American small towns and suburbs where he grew up. In his apparently innocent style are hidden transgressive themes that he represents from sarcasm, parody and humor.
Martin Paaskesen (Denmark, 1987), for his part, is committed to the chaotic and incoherent, seeking an ambiguity in the forms that is close to both the figurative and the abstract. The artist is very present in his painting, so the process of creation is transformed into something physical and almost natural, giving a childlike sense to the development of the work.
In turn, Galina Munroe (United Kingdom, 1993) associates her representations with the memories and images that have developed over time, deeply linked to personal stories or their own surroundings. Her paintings are characterized by flat colors and simple shapes, reflecting it on the canvas from a process without rules or restrictions, resulting in still lifes characterized by a certain positivity and simplicity.
Julio Linares (Spain, 1985), however, plays with collage and intense colors to shape static compositions where the figures lead the way. In his canvases we find cats that look directly at whoever looks at them, making, in this case, the exterior we are looking at is aware of our presence.
For their part, the canvases of Joachim Lambrechts (Belgium, 1986) respond to a spontaneous process and intuitive choices, a struggle between what the artist thinks and what emerges in the work while it is being created. His artistic experimentation began to manifest itself in graffiti and street art, and later moved to canvas, in which he reflects his sense of urgency and creative innocence.
For his part, Jacob Gerard (United States) transfers to the canvas the most conflictive and traumatic experiences of his childhood, from metaphors in a humorous key that he uses to express those emotions do not allow him to communicate what he thinks or feel. The bright contrasting colors and shiny varnishes distract the viewer from the deep and often painful meaning of the work, turning the paintings into windows into the artist.
As a result, the exhibition Pavilion generates in the space a sensation of an observatory from where the viewer can enter different realities, scenes of calm or where expressiveness stands out and, in its totality, they refer to all the diversity that nature offers us. 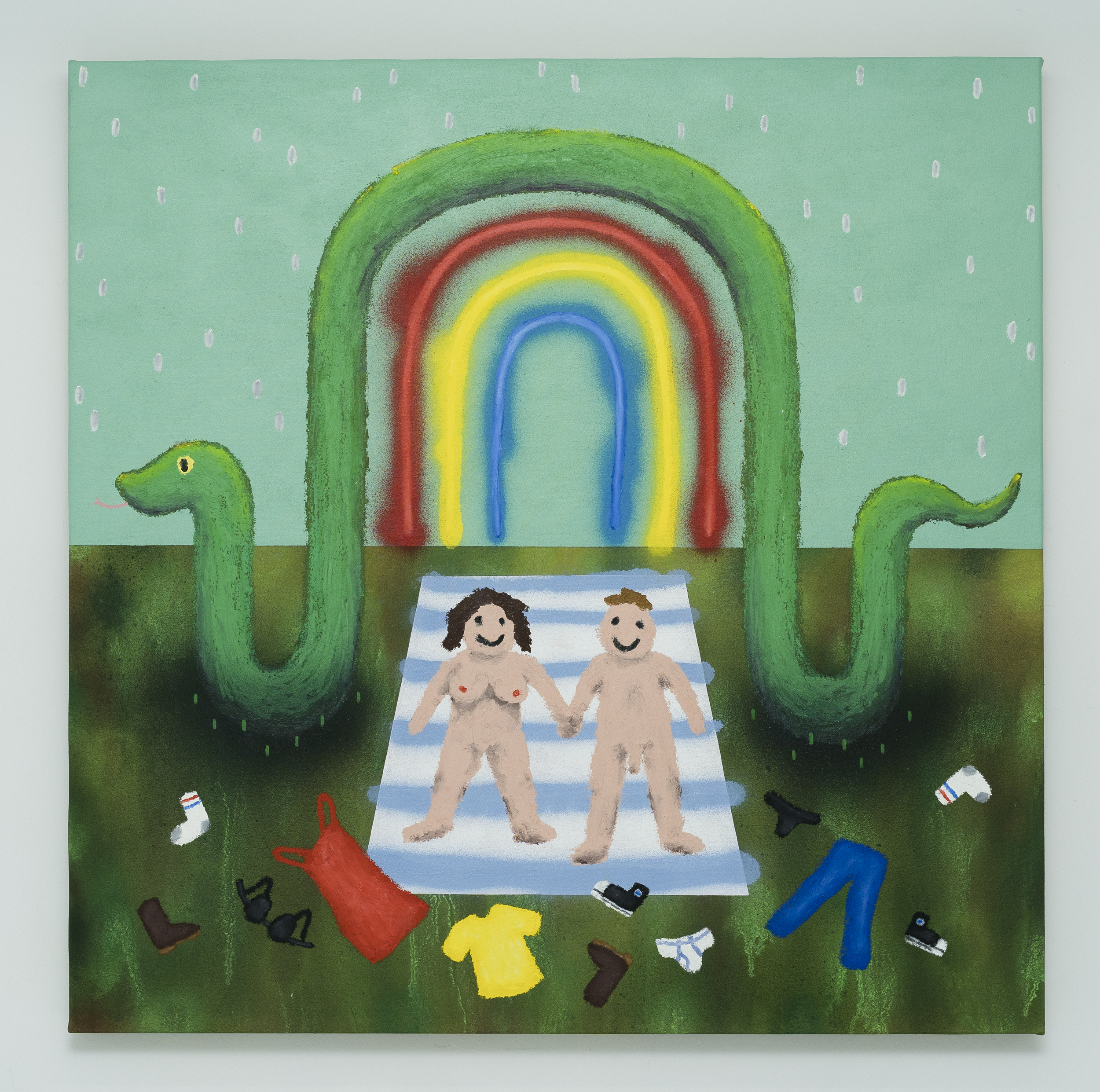