Namibia, on the south west coast of Africa, is often experienced as spare in the extreme. A harsh and demanding terrain it is a land without any running rivers; the task of survival particularly challenging. This portfolio from Namibian photographer Margaret Courtney-Clarke’s series ‘Cry Sadness into the Coming Rain’ reflects her eye for the significant in the apparently incidental, brings the tenacity of women to the fore and alerts us to the lives of the creatures who accompany humans in this space.

Courtney-Clarke’s photographs reveal the almost mythic endurance needed to survive in this environment. A barely visible donkey cart is smothered in the cloud of dust pouring from the brickworks rising like a fortress from the desert sands. A woman, arms raised as if exhorting some divine providence from the heavens, attempts to flag down prospective buyers for her goods - in this land, where drought and poaching ensure that few wild animals remain, cloth facsimiles mimic ostrich and rhino - a tragi-comic moment mystifying to the casual viewer. Equally enigmatic is the dead hare hoisted on a cable – pinioned by the camera’s perspectival alignment of it with the still point between earth and sky - another victim at the edge of the highway.

This is a flat landscape so raw that any vertical structure, however small, snags the eye. Courtney-Clarke’s awareness of the interdependence of vertical and horizontal worlds is evident in her tendency to draw attention to the significance of apparently minor moments by aligning them: signalling the continuance of life three ducks mirror the position of three eggs in a cage; the legs of a sleeping mother jut out horizontally from a makeshift shelter before the Spitzkoppe mountains which render the semiprecious stones that she sells; a bath, raised high on scaffolding, waits for rain – it waits a biblical seven years. A dog and a donkey are locked into parallel planes - both are incarcerated in their roles as beasts of burden - the one for humans, the other for its litter. Equally burdened a young woman, baby on back, drags a plastic bag of recyclables towards her informal settlement – a daily Sisyphean labour. The isolation of living beings in the horizontal planes of the desert, whether human or animal, often makes them monumental - a cockerel constrained in an improvised coop, gains fabled status when it saves a life in the desert, its crowing signalling human habitation.

Each image holds a story, offers a glimpse into life’s tenaciousness.

Yet in the hardship of day-to-day survival two women dance; currents of air ballooning their orange skirts as they swirl - seeking to survive, sometimes finding the means to thrive. 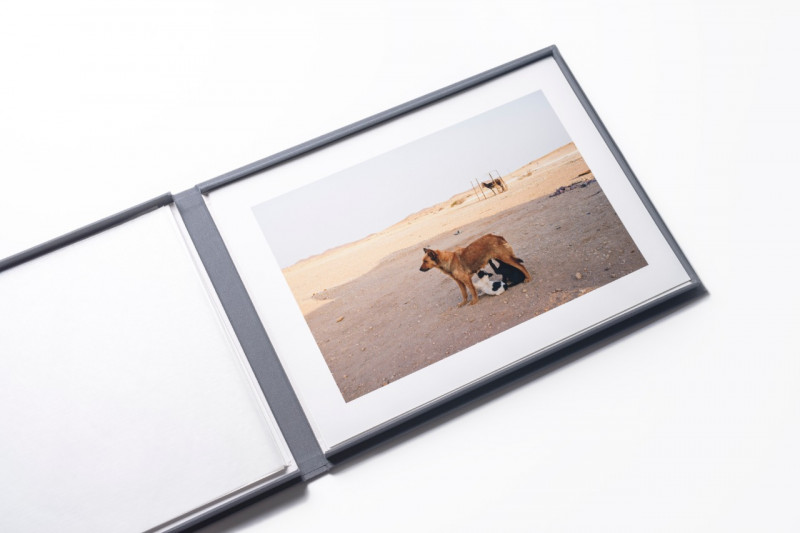