For our second E-xhibition we revisit the 2014 exhibit by Fernando Prats titled Todesfuge. His work was presented through various formats such as video, installation, photography and paper. Prats’ starting point was Paul Celan's well-known poem of the same title. As we celebrate the poets 100th anniversary we recall upon this exhibition that remains one of the last shows presented in the emblematic Joan Prats Gallery in Rambla de Catalunya. The space was designed by Josep Lluís Sert to whom we equally pay tribute through this presentation.

Paul Celan wrote this poem in 1945, shortly after his return from a forced-labor camp. Published some years later, the poem had a large impact on Germany, where it was considered to be “a moral lament of art against history”. In the installation, the poet articulates this funeral hymn as if it were truly a musical fugue.

For Paul Celan, the task of creating art meant never ceasing dialogue with obscure sources. It is this dialectic spirit between language and darkness and its attempts to prevail that gives sense to the work in this exhibition. His works, laden with a historical background, are born from an energy that pushed limits and is represented by smoke as an unequivocal materiality. They are works that correlate conflicting concepts such as annihilation and harmony, through their contradiction an expression of extreme discomfort is produced.

Fernando Prats constructs his narration from the skies of Auschwitz that occurred during the “Night of broken glass”. The rain, the smoke and the milk are symbols of maternal nourishment that appear in the image of the “black milk of dawn” (Schwarze Milch der Frühe). This is shown at the start of the poem which grounds the paradox in the matrix of creation. 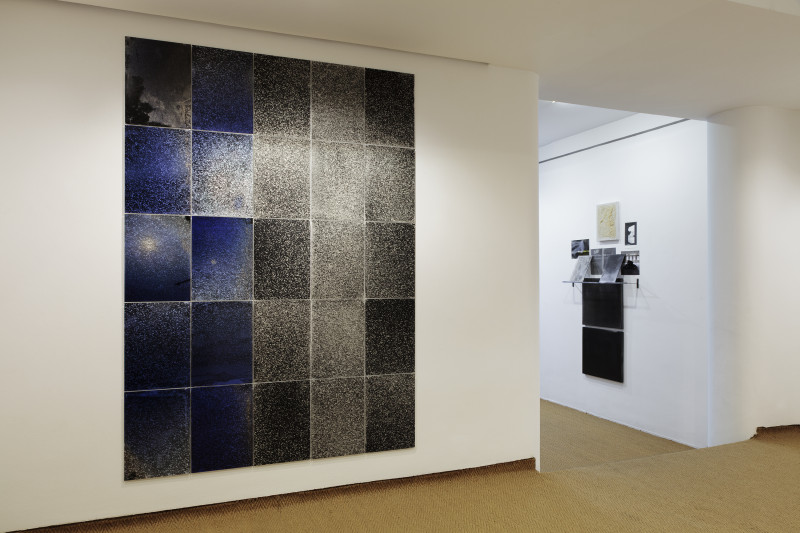