THE DAY AFTER TOMORROW

The Day After Tomorrow focuses on the politics of image by questioning its mainstream making methods that generate dialogues for and around socio-political subjects. It considers the subjective nature of historical subjects questioning furthermore concepts such as time, memory and image and the artist’s role in society. Emphasizing the relationship between historical and contemporary forms of movement, as well as the infrastructure and meaning of mobility in the cultural field the exhibition can be seen as a reflection on our pandemic ridden times.


Tudor Bratu’s Cheer Up Fellows consists out of a series of temporary public space installations, which deal with the specific relationships between public image (ie locations) and private or personalized language (thoughts). After careful selection of both texts and public sites a temporary installation is created using billboards and generative textual fragments. This installation or ‘generative atmospherical location’ is documented and reinstalled using photography, slide material, billboards and original texts.

Momu & No Es’ work revolves around the construction of stories, habits and routines stemming from their immediate surroundings. By questioning social roles and modifying the established rules, they propose other possible alternatives, using fiction and ingenuity to develop a series of storylines, events and fables that draw on the post-internet era. They create new discursive environments in which they mix and reinterpret imaginaries and references of popular culture. In their work they conceive characters and roles inspired from people and entities, which reflect the triviality of our contemporary time. Their aesthetics become literary constructions and techniques that originate temporary subjective realities, whose foundation is the ability to sublimate the mental of the everyday, questioning the absolute truth and endless love.

Iratxe Jaio & Klaas van Gorkum reconfigure their role as makers by deconstructing their older installation Producing Time in Between Other Things. Klaas van Gorkum’s grandfather belonged to a generation for whom ‘free time’ should be spent doing something productive. Upon retiring from work, he had his former colleagues at the factory weld together a lathe for him, so that he could take up woodturning. In old age, he was able to augment his modest pensioner’s fee by selling the products of his hobby. When he died, he left his son a cigar box filled with magazine clippings, sketches and blueprints of different objects made by turning wood, with the idea that it might come in handy some day. The contents of this box have been taken as a point of departure for a self-referential exploration of the notion of artistic production. The original machine on which the objects were made was recuperated and put back into operation. Recording their steps on video as they went along, the artists have been carrying out a series of woodturning experiments, connecting their physical actions to the productivity of the retired factory worker.

Harm Weistra’s photographic series entitled Curbed Chaos, The Beauty Beneath, show an unusual representation of everyday snapshots. By twisting their properties, the work conjures up a new reality. Although at first glance the images may seem somewhat familiar, on a closer look they are difficult to identify, depicting a reality that sidetracks our perception and mystifies the true nature of the initial image. Curbed Chaos turns failure into an opportunity. A software glitch inspired the artist to develop a procedure that is freeing him from the limitations of traditional photo editing and manipulation, leading to a personal approach that rips off the identity of the original snapshot. It results in an image that balances between reality and abstraction, inviting the viewers to charge it with a new meaning.

Cihad Caner’s What Happens to the Geographical Borders When the Land Itself Moves investigates current mass migration by focusing on the role of water and it’s image which has been distributed and given language that focuses on the “other”. The world is witnessing some of the largest refugee flows since the Second World War. Meanwhile, water crises are highlighted as one of the most pressing global challenges. In this context, migration and refugee flows are increasingly explained in terms of water scarcity perpetuated by climate change. For example, the drought of 2007-2010 in Syria as one of the main causes of the ongoing uprising and subsequent civil war, and the Mediterranean sea becoming a subsequent mode of passage for the people who had to flee. The project reveals the ecological and political aspects of water.

Ilke Gers works bring movement, behaviour, social and spatial conditions into play. Her work draws together the disciplines of design and physical training to investigate the human body in designed systems. She brings into play the way our movement and behaviour is choreographed by the rules and conditions of our environments, and experiment with how they can be re-imagined. Recent work explores the intersection of the structures and codes of the typographic form of language and sports fields markings, resulting in large scale language fields resembling playable game surfaces. Field#2 is part of Gers’s series of work called Organized Game, a collaboration-based game that plays with an open set of rules as score for a choreography. The field is constructed out of tape to adapt to a space where the audience can be in immediate physical proximity to the players – and therefore become physically implicated in the game.

The work of Thijs Ebbe Fokkens can be read as a story that alludes to scientific and religious endeavors that people undertake to get a grip on the world. His combinations of drawings, photographs, models and installations tell us of obscure moments and mysterious places. Fokkens’s scenes and situations derive from the desire to capture significance and the search for an ideal vantage point to do so, to get a good look at notions about us, about the self and the tech, about nature, time and other narratives. To orientate and position oneself in regard to such complex notions a view is needed that takes a lot of things into account simultaneously. Fokkens’ trail of thoughts and actions thus ends up creating a space, not stating a point. It’s an ambiguous space, full of promise, where nothing has come to a conclusive resolution yet. This poetic situation, this impasse that is the habitat of the work and world of the artist Thijs Ebbe Fokkens, provides the opportunity to contemplate and wonder.

Yasser Ballemans is interested in the role of art in rituals, such as parades, campfires, carnivals and commemorations. He researches how ornaments, decorations and “old-fashioned” techniques can be used in a contemporary way. Ballemans investigates the form language of traditional ceremonies, as seen in religious relics, floats, triumphal arches, flags, trophies, ornaments, and festive costumes in different cultures around the world. Depending on the context, his work is inspired by these forms in a playful and abstract way. He often plays with symmetry and repetition so that images are complex as well as tranquil, provoking contemplation and imagination. The title of the work The One Electron Universe refers to the theory according which it is possible that the whole universe exists out of one single electron traveling back and forward in time. These Triumph Arches are made to celebrate inspiring values and perspectives like The One Electron Universe theory.

Within his sculptural practice Roi Alter subverts what is usually taken for granted, including social norms, common concepts and the prevalent modes of production. Next to this Alter explores the zone between the visual and performing arts. Through humour, irony and insight but also a strong desire for subversion, Roi Alter’s work appear to be vital munitions in the face of contemporary society. They are but observations of the human dwelling, as full as it is with contradictory advancement and transgression, creation and destruction, purpose and vanity. It is a celebration of the world gradually becoming a dystopia, kissing human culture on the cheek, then spitting in its face. 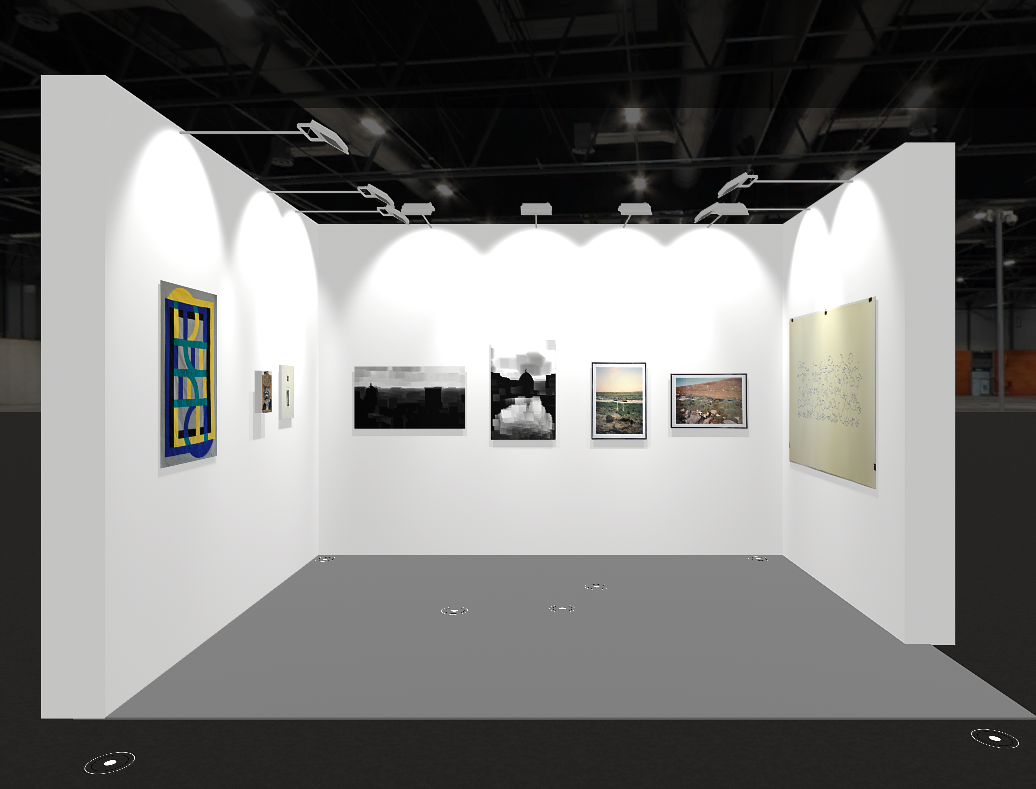